Teressi White Scholarship Foundation
You can make an online donation any time via Mightycause:   CLICK HERE TO DONATE
Thank you! Many small gifts add up to big support for our kids. 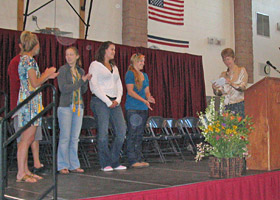 About the Grange Scholarship Foundation

The Aromas Grange’s scholarship fund is the Teressie White Memorial Scholarship Foundation. We incorporated as a 501(c)3 non-profit corporation in 2005. Our sole purpose is to raise money for scholarship awards to local graduating high school seniors. Donations are gladly accepted and are fully tax deductible. We also welcome the gift of your time: we are always looking for volunteers to help with our fund raisers and to participate in assessing students’ applications. Please join us and help support higher education for our Aromas students.

The Aromas Community Grange formed the Teressie White Memorial Scholarship Fund on May 13, 1977 to honor a fallen member. Teressie White was an active member of the Aromas Grange for 42 years before she was murdered in her home – reportedly by a burglar who stole the Grange cash box. At the request of her family, the Grange Scholarship Fund was formed in her memory. The first action the Grange took after creating the fund was to commit the receipts of the January pancake breakfast every year, in the month of her birthday, to build the fund. It opened with a balance of $554. The first scholarship on record was $100 given to Pat McCandless in October 1978. The scholarship fund continues today, having given away over $40,000 to deserving high school graduates.

In the beginning, the fund accumulated slowly through donations and fund-raisers, and the regular addition of the January breakfast receipts. Between 1980 and 1989 fourteen scholarships were awarded in varying amounts from $250 to $500. By August of 1989 the fund had accumulated a balance of $9,573.71. In 1990 there were five applicants, three of whom were awarded $200 each. The scholarship fund was managed by a Grange committee, and its activities recorded in the regular Grange monthly meeting minutes.

When the Aromas Grange adopted the “Action Grange” format in 2001 it was in response to a surge in membership and new leadership. A new group joined the scholarship committee and began fundraising in earnest. The biannual Grange concert series was started, with most of the proceeds going to the scholarship fund. Other community groups pitched in. The Aromas Hills Artisans started an annual raffle of fine art, jewelry, pottery and handcrafts at the October Grange breakfast and donated the money they raised. The January breakfast proceeds were augmented by the addition of the receipts from the January Contra Dance. When the Artisans started their own scholarship program, they continued to give half of the raffle proceeds to the Grange scholarship efforts.

The fund continued to grow, reaching a total of $14,717.69 by October of 2002. At that point the scholarship committee decided to commit $10,000 in a secure high-yield investment to help build toward a self-sustaining endowment. This guaranteed that at least $1,000 would be available to award in scholarships every year. Fundraising efforts could then go toward increasing the principal in the fund.

In 2002 there were two scholarship applications; both were awarded $500, but we wanted to do more. In spring of the next year, 2003, the outreach effort was stepped up. Advisors at the local high schools were contacted and applications were delivered to their offices. The word was sent out through local organizations and community members that scholarships were available through the Aromas Grange. The response was overwhelming: eight students applied, all very qualified. The scholarship committee struggled painfully with the difficulty of selecting the two most deserving students and awarded them $500 each.

In August of 2003 the first live auction was held during the town’s annual Aromas Day celebration, raising over $3,700 for the scholarship fund. It was the first time any single fundraiser had ever raised over $1,000—it was very exciting. The community was wonderfully supportive, donating a dazzling array of auction items, both from businesses and individuals, including some valuable antiques and art treasures. During the process of soliciting auction items, the auction volunteers realized that having 501(c)3 status would be an important next step so that future donations could be tax deductible. The scholarship committee concurred.

A Board of Directors was formed for the Teressie White Memorial Scholarship Foundation and they approved a set of by-laws. We registered as a non-profit corporation with the State of California and applied for tax-deductible status, which was granted in 2005. Criteria for selecting qualified applicants and a scoring rubric to rank the applications were developed and adopted. As we closed out the books at the end of 2004 the Grange executive board separated the Teressie White Memorial Scholarship funds from the Grange general fund and set up a separate checking account.

Although the first auction receipts in August of ‘03 came too late for that particular round of requests, we were delighted the following June to be able to double the funds allotted for the annual awards while significantly adding to our scholarship fund. In spring of 2004 we received five stellar applications. We awarded each student $400 for a total of $2,000. A second live auction in August ‘04 raised another $3,800, bringing total monies raised in the year to $5,286.70. In the spring of 2005 we selected the three most qualified from a field of four applicants and again awarded a total of $2,000. An additional $10,000 was invested at 10% interest.

In 2006 we had ten applicants, most of whom were highly qualified, and decided to award $3,000, divided among the five top students. In 2007 we awarded three scholarships totaling $2,750 to the three students who applied, giving two first-ever $1,000 awards. Other local organizations also reported receiving fewer applications than usual in 2007; we resolved to work more closely with the local high school in 2008 to make sure that all students are aware of the scholarship opportunities available to them.

We were delighted in 2007 to receive our very first grant, in the amount of $5,000, from The Boye Foundation. The Boye Foundation is a private charitable family fund that makes grants to select 501(c)3 organizations that can only be nominated by family members. We are extremely fortunate that the daughter of an Aromas Grange member is also a member of the Boye family and put forward the TWMSF for an award.

It is our heartfelt desire to continue to support the efforts of students in this small rural community to achieve their goal of higher education. At the same time, we are rapidly growing our principal in a secure, high-yield investment, building toward our goal of $50,000 which will yield a minimum of $5,000 to be awarded every year. We currently have $35,000 invested so that leaves just $15,000 to go! We encourage you to consider joining the Grange and the scholarship committee. It is both fun and rewarding to support the youth of our community, we welcome you to join us.

Your ticket for the: Teressi White Scholarship Foundation